1 Paul, an apostle, (not of men, neither by man, but by Jesus Christ, and God the Father, who raised him from the dead;)

2 And all the brethren which are with me, unto the churches of Galatia:

3 Grace be to you and peace from God the Father, and from our Lord Jesus Christ,

4 Who gave himself for our sins, that he might deliver us from this present evil world, according to the will of God and our Father:

5 To whom be glory for ever and ever. Amen.

6 I marvel that ye are so soon removed from him that called you into the grace of Christ unto another gospel:

7 Which is not another; but there be some that trouble you, and would pervert the gospel of Christ.

8 But though we, or an angel from heaven, preach any other gospel unto you than that which we have preached unto you, let him be accursed.

9 As we said before, so say I now again, If any man preach any other gospel unto you than that ye have received, let him be accursed.

10 For do I now persuade men, or God? or do I seek to please men? for if I yet pleased men, I should not be the servant of Christ.

11 But I certify you, brethren, that the gospel which was preached of me is not after man.

12 For I neither received it of man, neither was I taught it, but by the revelation of Jesus Christ.

13 For ye have heard of my conversation in time past in the Jews’ religion, how that beyond measure I persecuted the church of God, and wasted it:

14 And profited in the Jews’ religion above many my equals in mine own nation, being more exceedingly zealous of the traditions of my fathers.

15 But when it pleased God, who separated me from my mother’s womb, and called me by his grace,

16 To reveal his Son in me, that I might preach him among the heathen; immediately I conferred not with flesh and blood:

17 Neither went I up to Jerusalem to them which were apostles before me; but I went into Arabia, and returned again unto Damascus.

18 Then after three years I went up to Jerusalem to see Peter, and abode with him fifteen days.

19 But other of the apostles saw I none, save James the Lord’s brother.

20 Now the things which I write unto you, behold, before God, I lie not.

21 Afterwards I came into the regions of Syria and Cilicia;

22 And was unknown by face unto the churches of Judaea which were in Christ:

23 But they had heard only, That he which persecuted us in times past now preacheth the faith which once he destroyed.

24 And they glorified God in me.

On the map below, find the following locations from Acts 9 and Galatians 1 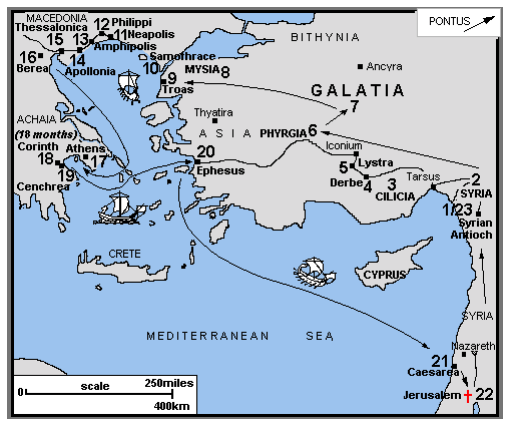