The Witness of 70 AD

“But when the king heard thereof, he was wroth: and he sent forth his armies,
and destroyed those murderers, and burned up their city.” 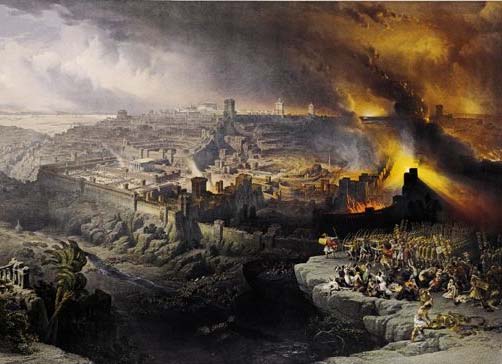 The Destruction of Jerusalem by Roman Armies
under command of Titus in AD 70. By David Roberts.

“And this gospel of the kingdom shall be preached in all the world
for a witness unto all nations; and then shall the end come.”

There is no single greater evidence or proof of the divine origin of Christianity, the great glory and power of the Lord Jesus Christ as King of the kingdom of God, and the accuracy and reliability of the Bible than the prophecies and their fulfillments regarding the destruction of Jerusalem by the Roman armies under Titus in 70 AD.

There Is Value in Studying this Subject

This Event Is Ignored by Most

A Complete Study Is Beyond these Sermons

30AD Jesus laid down His life in the spring, at Passover, 3½ years after His baptism, in the midst of Daniel’s 70th week, rose from the dead, and ascended gloriously to His throne in heaven.

30AD The apostles received great power at Pentecost and took the gospel to Jews and then Gentiles.

33AD The main confirming of the covenant with Jews came to an end, as Daniel’s 70th week ended. Some identify this event with the stoning of Stephen, but there is insufficient evidence.

66AD The gospel had been preached in all the world to every creature by this time, which was the final condition Jesus had determined before the Romans could come and destroy the Jews.

66AD Sign and revelatory gifts ended, as the New Testament scripture had been written and collated.

66AD The Jews became more and more rebellious and revolted against Caesar and Roman authority.

66AD Cestius Gallus brought the Twelfth Legion from Antioch in November, surrounded the city, and could have taken it easily, but left for no reason and at great loss! This enflamed the Jewish rebellion with false hope, and it angered Rome greatly to totally destroy the Jews! But it began the 1290 and 1335 days prophesied by Daniel leading up to the Jews’ scattering (Dan 12:1-13).

67AD Nero appoints Vespasian in charge of Judea, who brings several legions and begins a slow and methodical campaign of destruction of the Jews from city to city that lasts for 2 years.

70AD Believers in the city and country, knowing the warnings, and having witnessed Cestius’s surrounding of Jerusalem, left for the mountains before Titus set his seige (Luke 21:20-22).

70AD Titus, son of Emperor Vespasian and prince of Rome, united four Roman legions and destroyed the city of Jerusalem and its temple in August after a five-month siege. This ended the 1290 and 1335 days prophesied by Daniel leading up to the Jews’ scattering (Dan 12:1-13).

70AD The siege was bad enough for women to eat their children (See Josephus). But the Jews killed more themselves due to demonical factions that had no mercy for life, the city, or the temple.

70AD The total number of dead was over 1.1 million, for Titus besieged the city at Passover, when it was filled with visitors for worship; and there were only 97,000 captives taken for slaves.

70AD No individual city had ever endured such pain. World War II was modest in comparison. For example, Hiroshima only lost around 100,000, most of them dying instantly and painlessly.

70AD Captives over 17 not taken to Rome for public display were carried by ship to Egypt as slaves, where they were sold very cheaply due to the supply far exceeding the demand (Deut 28:68).

70AD Titus ordered the city dug up, until it appeared to have never been inhabited; and Terentius Rufus, commander of the Tenth Legion, plowed Mount Zion like a farmer’s field (Micah 3:12).

73AD The fortress of Masada was besieged by Rome and 1000 final Jewish rebels committed suicide.

Note: For more details, chronological tables, and timelines, see the links at the bottom of this document.

A Reminder about Prophetic Language

Prophecy of John the Baptist

Prophecy of the Jews

Was the Gospel Preached in all the World?

For a Witness to all Nations

Then Shall the End Come

Why We Are Not Preterists