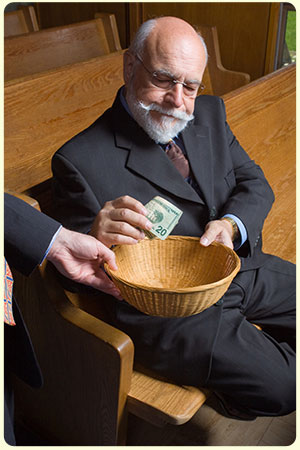 A growing fad among some Christians is to deny tithing under the New Testament. Since there are no specific directions for tithing in the New Testament, they rejoice that they can avoid this duty. So they leap on the no-tithing bandwagon and roll out their rabid rhetoric. It is time to take off their wheels and let the water cover them.

What is a tithe? It is 10% of income or assets returned to God for His faithfulness and mercy.

Did the tithe originate with Moses? No, Abraham gave a tenth of the spoils of his victory to Melchisedec, and Jacob promised God a tenth for His blessings, and these men lived 300-400 years before Moses and the Law (Gen 14:18-20; 28:22; Gal 3:17). Capital punishment, like tithing, originated long before the Law, but the Law systematized its practice (Gen 9:6).

Does the New Testament require a tithe? No, it does not mention tithing by name, except for Jesus correcting the Jews abuse of tithing (Matt 23:23; Luke 11:42) and Paul’s historical description of Abraham giving Melchisedec a tithe (Heb 7:1-4). But there are many useful and godly principles of the Old Testament that are not repeated specifically in the New Testament.

Should a church require a tithe? No, a church cannot require a tithe without New Testament authority. But a church should preach hard about giving, teach members the origin and nature of the tithe, and exhort members about exceeding the tithe. And a church might use the tithe as a guideline for warning or disciplining members for covetousness (I Cor 5:11; II Thess 3:6).

Should they give by gross or net income? The question indicates a selfish and stingy heart. In any other situation, this person will always state his income by the highest number; but when it comes to God, he lowers it to give Him less. Gross income is what you were paid; you received many benefits for the taxes deducted. You should give proportionately of your gross income.

What is firstfruits giving? Taken from the first produce of a field or vineyard, it is honoring the Lord off the top, rather than from what remains (Pr 3:9). Therefore, firstfruits giving is more than just a few bucks, is the first use of income, is given from a blessing not for a blessing, and is given from gross income. And the Lord is very pleased with such an approach (Pr 3:10).

But the New Testament does not require a tithe? But the tithe was not abolished, as was the Sabbath. The Sabbath was not pre-Moses, was for Israel only, and was clearly abolished according to Paul. Tithing was pre-Moses and not rejected by Paul, thus remaining as a guide.

But the New Testament does not require a tithe? That is right, but Paul did appeal to the Law of Moses for principles of financial giving, which shows the remaining validity of the principles pertaining to giving (I Cor 9:8-9; II Cor 9:9; I Tim 5:18).

But anything like a tithe becomes a mere ritual? Worship becoming a dead ritual depends on your heart, for systematic giving can be done cheerfully, as Moses required of the Jews, and Paul required of the Gentiles (I Cor 16:1-3). Does attending assemblies every Lord’s Day or daily reading of the Bible become a dead ritual merely by its discipline or habit? No!

What if I cannot afford to give? You must be in financial trouble, so you cannot afford not to give! Joseph and Mary, though poor, brought two turtledoves for our Lord’s dedication (Luke 2:22-24; Lev 12:8). Jesus took note of a widow giving two mites over rich men giving much (Lev 12:1-4). Moses required a soul offering of every citizen without regard for ability to give (Ex 30:15). The Philippians gave generously, though they were comparatively poor (II Cor 8:1-5).

What about money-grubbing televangelists? They should be rejected as false prophets, for they are not sent by God, do not preach God’s words, steal widows’ houses through fake prayers, promise lies about getting rich, and sell trinkets without shame (Matt 23:14). But their heresies, lies, and scams do not negate the need to generously support God’s ministers (I Tim 5:17-18).

What about giving to get? Our blessed and merciful heavenly Father has repeatedly promised His reward upon those who give liberally, and these promises encourage our obedience, as long life encourages parental honor (Eph 6:1-3). But great men with great hearts, like David, give out of delight and love for God rather than what they might receive as a result of their giving!

What if I give hypocritically? That is your wicked choice, but it has nothing to do with a proper understanding of tithing and giving. Financial giving will not sanctify your life or make up for wickedness in other areas (Is 58:3-7; Hag 2:10-19; Jas 1:27). Jesus Christ taught you to do both – to live a righteous life of mercy, judgment, and faith and to give financially (Matt 23:23).