What Would Jesus Do … with “WWJD”? 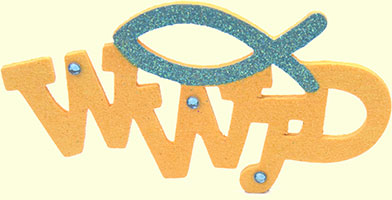 Would He, His apostles, or His disciples wear
bracelets, necklaces, or t-shirts with this logo?

They would condemn this junk!

1. The Lord Jesus Christ Himself condemned any such outward paraphernalia as being a hypocritical religious sham. He said:

“But all their works they do for to be seen of men: they make broad their phylacteries, and enlarge the borders of their garments.”
Matthew 23:5

Phylactery. A product of Jewish ceremonial superstition, in which strips of parchment bearing Scripture verses were worn on the left arm and forehead to publicly show dedication to God and His Scriptures. The practice developed from a literal perversion of God’s spiritual and figurative commandments in Exodus 13:16; Deuteronomy 6:8; and 11:18. The Pharisees perfected the pretentious custom along with other similar rituals as part of their hypocritical religious form (Mark 7:3-4). Because they were even known to enlarge the traditional size of the phylactery to appear ever more spiritual before men, the Lord Jesus Christ severely censured them for it (Matthew 23:5).

3. He would remind us that true religion is of the heart, not the lips or the wrist (Matt 15:7-9). So that those who emphasize such an outward show are hypocrites.

5. He would remind us that doing things to be seen of men has its reward, the praise of men; but such things bring no reward from God in heaven (Matthew 6:2,5,16).

6. He would explain that the people wearing this junk do not have a clue about what He would do, because they are ignorant of His word (Matt 22:29; II Tim 4:3-4).

7. He would remind us that a form of Christianity without life-changing authority is part of the perilous times of the last days (II Tim 3:1-5). There is no revival in America; religious seducers are getting worse and worse, deceiving and being deceived (II Tim 3:13). Of course, if you tell these tree-hugging, carnal Christians about the true Jesus Christ, they will hate and persecute you (II Tim 3:12).