A Forged Image
of a Fake Jesus
from the False Church

The Shroud of Turin is another lie of Roman Catholicism. Bible Christians have always known it was a forgery, because God gave the Bible to save them from the fraud and superstition of those who use religion to deceive men and fill their coffers.

The Shroud of Turin is a cloth 14′ long and 3′ wide that many believe was the burial cloth of Jesus. It bears the image of a wounded, longhaired man. Rome has not declared it authentic, but she allows its adoration and promotion as her most famous relic. Pope Paul VI called it “the greatest relic in Christendom.”

It first showed up in a French village around 1355, when relics and other superstitious practices of the Roman Catholic Church were at their height in audacity and quantity. It then made its way to the Italian town of Turin, where it has been since 1578.

Without any documentation or historical explanation for its whereabouts for over 1300 years, many of those not influenced by Catholic veneration for relics have dismissed it as a fraud.

In 1984 scholars suggested the Vatican authorize radiocarbon dating to test the authenticity of the cloth. The Catholic Church chose Oxford University, the University of Arizona, and the Federal Institute of Technology in Zurich, Switzerland for the testing. Results released in 1988 gave the limits for its creation to have been between the years 1260 and 1390.

Since then others have presented numerous scientific studies, conjectural theories, and historical possibilities to support its authenticity. Of course, most Catholics passionately believe that it is the real thing without any evidence but tacit church approval.

But God has plainly declared it a deceptive fraud, lie, and scam. 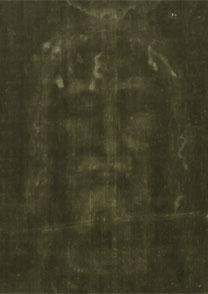 Shroud believers take a close-up of the face, open the image’s eyes, and create a Jesus consistent with Catholic icons and paintings.

Or did the original artist use the same icons and pictures to create the image in the first place?

Bible Proofs that It Is a Lie

The evidence is clear, concise, and certain … to all noble Bible believers (Acts 17:11; I Thess 5:21; I Tim 6:20-21). The Shroud of Turin is a lie of the Roman Catholic Church. There is sufficient evidence against it that any court in the world that would honor the Holy Scriptures as a legitimate witness would condemn it easily.